John E. Downing, MD was born and grew up in Monroe County, Kentucky. He attended college at Georgetown College and Baylor University, where he received a B. S. in Biology with honors. He earned his medical degree from the University of Louisville where he was President of the Alpha Omega Alpha Honor society. After his medical internship at Parkland Hospital in Dallas, Texas he joined the U. S. Navy and attended the School of Aerospace Medicine and became a Naval Flight Surgeon. He took his residency training at the Naval Hospital, Wills Eye Hospital and the University of Pennsylvania. 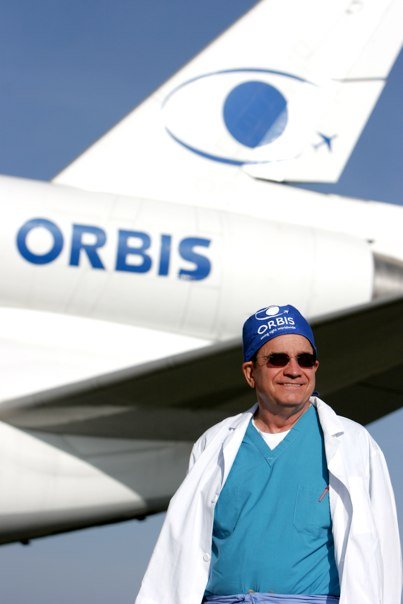 He went off of active duty with the Navy in 1971, when he started his practice in Bowling Green but remained in the Naval Reserve until he retired as a Navy Captain with twenty-one years of service. He has taught part time since 1971 in the Department of Ophthalmology at the Vanderbilt School of Medicine, where he holds the rank of Clinical Professor. He has received several awards for teaching excellence. In 2010 he began teaching part time in the Department of Ophthalmology at the University of Louisville, and has received three teaching awards there. He has published several papers on cataract and lens implant surgery.

In addition, since 1989 he has been a Volunteer Faculty Member with Project Orbis, which has the world’s only flying eye hospital. We fly into developing countries and work with their ophthalmologists to teach them more advanced eye surgery techniques. In many countries it is difficult for physicians to travel to international medical conferences to travel to medical conferences and learn new techniques. Orbis has worked in over eighty countries with thousands of local doctors. He has also gone on Orbis hospital based programs where and he and an assistant teach new techniques to local doctors in their local hospitals.

Dr. John Downing’s primary areas of practice are cataract, intraocular lens implant surgery and refractive surgery such as PRK which is similar to LASIK for correcting visual problems such as nearsightedness and astigmatism. He also treats a wide variety of medical problems such as glaucoma and diabetes as well as doing routine wellness eye care.